The Rosary on the Coast prayer event was marked by hundreds of people at over a dozen locations across the Diocese of East Anglia yesterday.

Hundreds of people braved cold, wet and windy conditions across the East Anglian coast (April 29) to join the first-ever Rosary on the Coast prayer initiative.

Scores of people gathered in up to 15 locations across the Norfolk and Suffolk coast including the ruins of Greyfriars Priory at Dunwich, led by Dominican friars from Our Lady and the English Martyrs, Cambridge; the ruins of St Edmund’s Chapel on the cliff at Hunstanton, led by Fr Peter Rollings; and Happisburgh in Norfolk led by Elaine Haughton and members of the Sacred Heart Parish in Aylsham and Hoveton.

At Felixstowe Pier over 30 people, led by Fr John Barnes of St Felix Church, Felixstowe, prayed the Glorious Mysteries of the Rosary. Those who attended were also from St Mary (Ipswich), St Mark’s (Ipswich) and the religious Sisters of Jesus and Mary (Felixstowe).

“It was an extremely cold and windswept afternoon, but the atmosphere was great and helped to take our mind off the cold,” said Julian Wong.

In Lowestoft, a small group from Our Lady Star of the Sea, Beccles and Kelvedon, led by Fr Paul Chanh and Apostleship of the Sea port chaplain Patricia Ezra, walked to Ness Point, the most easterly location in the UK before returning to the church for the Rosary and then to the Stella Maris Hall for refreshments.

At Sea Palling on the Norfolk coast, around 60 people, including students from the University of East Anglia Catholic Society and parishioners from St John the Baptist Cathedral in Norwich, were joined by Bishop Alan Hopes on the beach next to the lifeboat station.

Bishop Alan said: “I commend wholeheartedly this national prayer initiative. Our parishes were encouraged to make their way to a location on the coast, and to say the Rosary in union with Catholics around our country’s shores, for three purposes: the renewal of the faith in this Dowry of Mary, a greater recognition in our culture of the sanctity of human life from conception until natural death, and finally for peace for our country and the world, in a time of great instability.”

England national co-ordinator, Antonia Moffat, from Walsingham, joined a group from the National Shrine of Our Lady at the beach atWells-next-the-Sea, led by Mgr John Armitage.

Antonia said: “It is clear that in a time of difficulty and need for prayer, people are looking for an opportunity for a supernatural response and a call to spiritual arms.

“Many saints have emphasised the importance of the Rosary as a powerful prayer which brings supernatural solutions. We hope to witness to the power of prayer to change lives. The Rosary is the spiritual sword for our time.”

Other groups taking part included: Our Lady of the Annunciation in King’s Lynn; St Joseph’s Church, Sheringham and Our Lady of Refuge, Cromer with groups both at the churches and the beach; St Mary’s Church in Great Yarmouth led by Brian Lafferty KSC; at Bacton beach in Norfolk led by St George’s parish in Norwich; and at Our Lady and St Peter Church, Aldeburgh, led by Fr Tony Rogers.

Pope Francis has given his apostolic blessing to all who participated in Rosary on the Coast and Cardinal Vincent Nichols gave his great endorsement, along with many of the bishops of England, Scotland and Wales.

Pictured above is the gathering at Felixstowe Pier. Picture by Julian Wong.

Click here or see below for a picture gallery of several locations in the Rosary on the Coast. 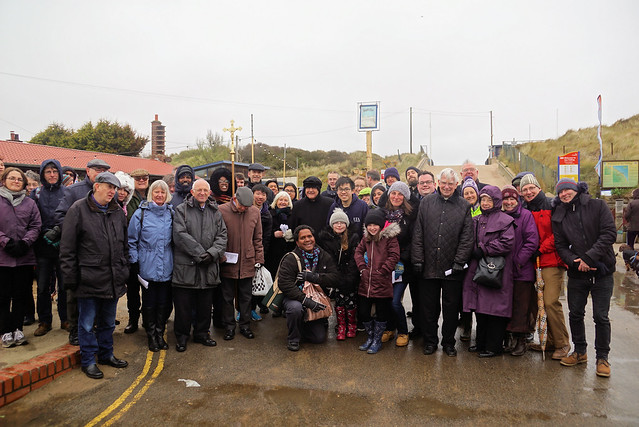